Father Tim McCabe, SJ, is the executive director and president of the Pope Francis Center.

Always drawn to the poor and marginalized, Fr. Tim became involved with the Detroit peace community and the Catholic Worker Movement as a young man. In addition to serving as the director of a refugee settlement project, Fr. McCabe also helped repair houses for Detroit’s inner-city poor and served meals in a soup kitchen.

On a humanitarian aid mission to El Salvador, he was drawn to his Jesuit companions, whose faith in action propelled his decision to attend the Jesuit-based University of Detroit Mercy, where he earned a bachelor’s degree in political science. He joined the Jesuit Volunteer Corps, serving as the human service organization’s Midwest director for 12 years. His work with JVC introduced Fr. Tim’s to Ignatian spirituality, making a tremendous impact not only on how he prayed, but how he understood the world.

In 2005, after many years of discerning a vocation to the Society of Jesus, Fr. Tim answered God’s call to join the Jesuit faith. He provided hospice support to homeless individuals in San Francisco before attending to the University of Chicago at Loyola, where he earned a degree in advanced philosophy studies.

Post-graduation, Fr. Tim was called to Loyola High School in Detroit, serving as the school’s development director before returning to Chicago for a two-year stint with the Ignatian Spirituality Project, which coordinates retreats for homeless men and women.

Fr. Tim continued his studies at the Jesuit School of Theology of Santa Clara University in Berkley, Calif., where he earned a Master of Divinity degree while serving as a deacon at St. Agnes Catholic Church in San Francisco. 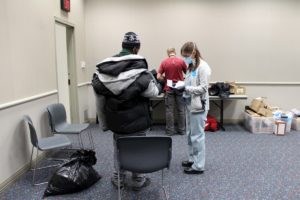 We’ve temporarily relocated to the TCF Center this winter!

Since March, our team has worked tirelessly to provide our guests refuge during the pandemic. With our relocation, we’ve launched our Sanctuary for the Season fundraising campaign to help cover $250,000 in additional expenses to serve our guests through this season.